Sustainable food systems, the situation in the European agricultural market as well as specific challenges related to COVID-19 and African swine fever were the main items discussed during the informal videoconference meeting of the agricultural and fisheries ministers. Ministers also touched upon the EU forest related policies and the EU forest strategy. 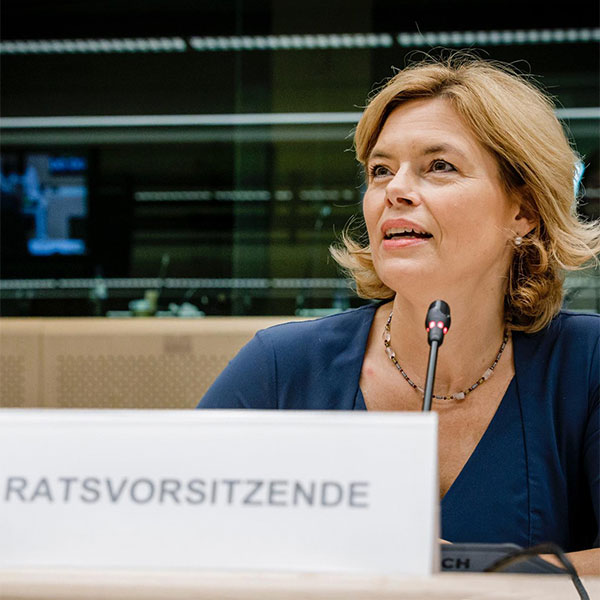 The range of challenges that Europe’s agrifood sector is facing today is wide. Coordination among member states is more needed than ever and at different levels. We need to ensure that our policies on agrifood, environment and health are aligned and that we continue sharing information on fast-evolving and, in some cases, unprecedented situations like the COVID-19 pandemic.

Julia Klöckner Federal Minister for Food and Agriculture of Germany

During the morning session, the presidency of the Council of the EU, together with the European Commission, informed ministers of the progress made within the EU on tackling food losses and food waste. The presidency highlighted that member states now have relevant national strategies and plans in place, also featuring food donations as a crucial element of these strategies. Ministers referred to the impact of COVID-19 on food losses and waste with the presidency highlighting the need to avoid “hamstering” food so as it remains available to all. The Commission expressed its willingness to extend the mandate of the EU platform on food losses and food waste beyond 2021.

The Danish delegation informed ministers about the state of play in relation to mink and COVID19 in the country, explaining the potential risk to the efficacy of COVID-19 vaccines because of infected minks from a mutated version of the virus. Ministers agreed that this is a European health issue and not only an animal welfare concern. The presidency expressed the need to continue sharing information on this issue and organise a future discussion on how mink is bred in Europe.

The Czech and Polish delegations informed ministers of their request to the Commission for further coordination in combating African swine fever and for a reduction of the associated administrative burden, in particular with regard to the procedures related to co-financing. Ministers broadly supported this initiative, highlighting the need for more coordinating measures which will enable member states to combat and eradicate the African swine fever.

The Commission also informed ministers on the outcome of the farm to fork conference, organised by the Commission on 15-16 October 2020. Some ministers asked the Commission to conduct relevant impact assessments and stressed the importance of all stakeholders participating in the strategy. Ministers also used the opportunity to seek clarification from the Commission whether it intends to withdraw its proposal on the post-2020 CAP reform package; the notion was rejected by Commissioner Kyriakides.

Invited by the presidency in the view of preparing the EU’s contribution to the next year’s UN Food Systems Summit, the UN Secretary-General’s Special Envoy for the summit, Dr. Agnes Kalibata briefed ministers on the preparations and objectives of the summit. Ministers, highlighted the importance of the Green Deal and the farm to fork strategy in accelerating global transition to sustainable food systems. They also called for an ambitious summit that can bring all stakeholders together. The Council will set its key political priorities for the summit through relevant conclusions, planned to be adopted in spring 2021.

Ministers also welcomed the recently adopted Council conclusions on the EU forest-related policies and EU forest strategy post 2020, highlighting the significance of forests for climate protection and biodiversity. Several ministers explained that the EU forest strategy needs to be aligned with other relevant strategies such as the biodiversity strategy. Improving coordination in forest-related policies within the EU, as set out in the conclusions, was also supported broadly by ministers.

Ministers held an exchange of views based on a Commission presentation and written contributions from member states. Ministers outlined several factors putting pressure on several agrifood markets such as the pig (mentioned by many ministers), beef, poultry, wine and dairy markets among others. Different delegations asked for rapid interventions to address successfully aggravating challenges including the second wave of the COVID-19 pandemic, the closure of the hospitality sector, the African swine fever and the current as well as looming trade restrictions. The Austrian delegation also informed ministers on the agricultural implications of the EU Mercosur association agreement; several delegations called for balanced EU trade agreements which will maintain the high environmental standards achieved with the EU. Some delegations also supported the view of factoring in the high economic potential of such agreements.