Main results of the European Council 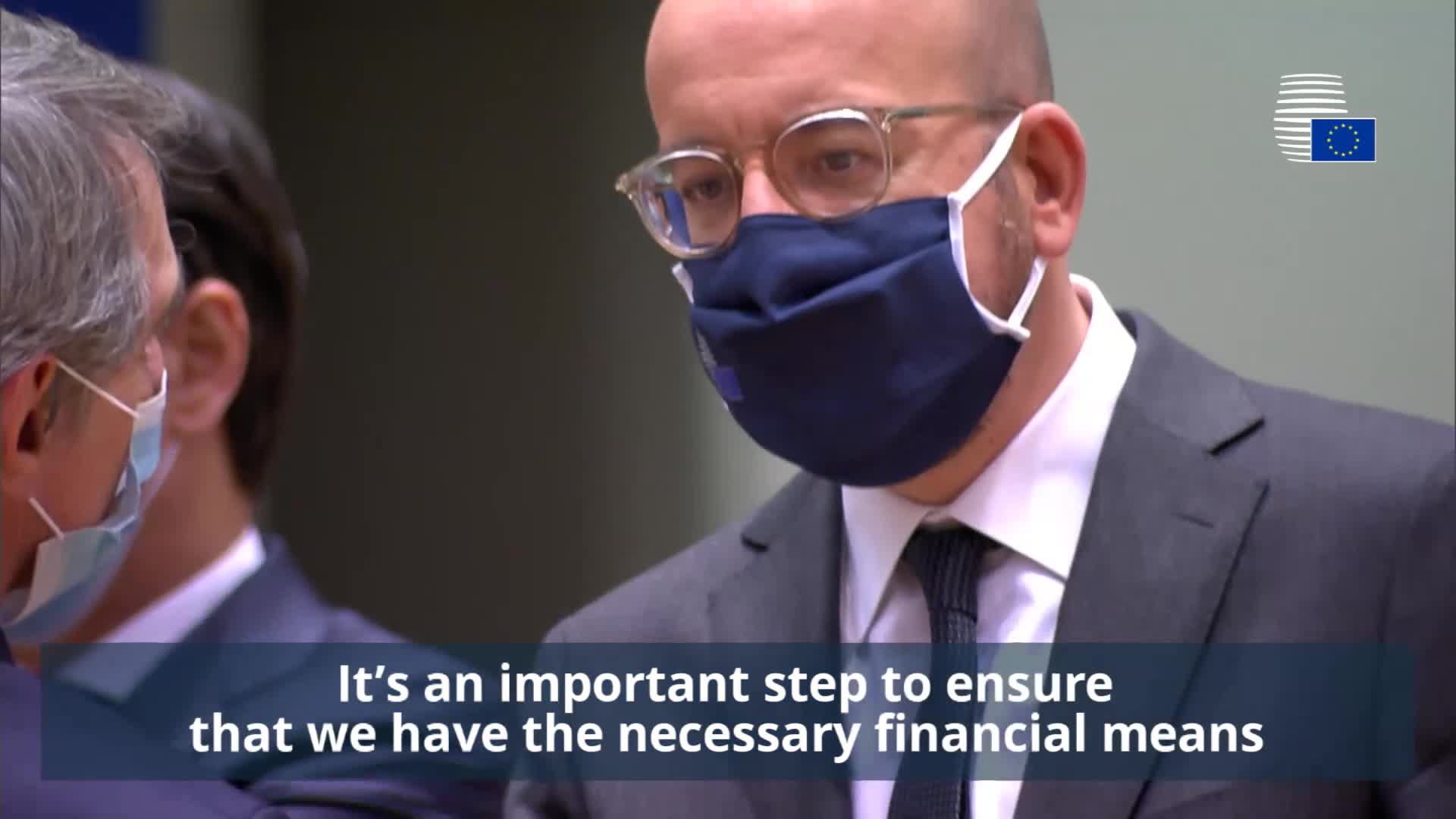 EU leaders reached a deal to address the concerns expressed on the recovery package and agreed on the 55% emissions reduction goal. They also adopted conclusions on COVID-19, security and external relations, and met for a Euro Summit in inclusive format.

The European Council agreed a number of elements to address the concerns expressed with regard to the draft Regulation on a general regime of conditionality for the protection of the EU budget.

Against this background, the European Council invited the European Parliament and the Council to immediately take the necessary steps for the adoption of the whole package of relevant instruments, including the multiannual financial framework regulation and the own resources decision. The leaders confirmed that member states would do their utmost to approve the Own Resources Decision in accordance with their respective constitutional requirements with a view to its prompt entry into force.

EU leaders welcomed the recent positive announcements on COVID-19 vaccines and the conclusion of common advance purchase agreements by the Commission. However, they stressed that the epidemiological situation in Europe remains worrying. The leaders called for efforts to counter the spread of the virus to be sustained, to prevent further waves of infections.

In particular, EU leaders agreed to enhance the sharing of experiences and plans for the future and prepare for a gradual lifting of restrictions and a return to normal travel, when the situation allows. The European Council also highlighted the need to pursue work to increase resilience in the area of health.

EU leaders invited the European Commission to present a proposal for a Council recommendation on a common framework for rapid antigen tests and for the mutual recognition of test results. A coordinated approach to vaccination certificates should also be developed.

Vaccination should be treated as a global public good.

EU leaders also discussed the global efforts against the pandemic and restated that the EU will continue to contribute to the international response, including via the COVAX facility for guaranteeing affordable and fair access to vaccines for all.

Finally, to better anticipate and manage potential future pandemics the EU will promote ways to reinforce international cooperation, including through a possible international treaty on pandemics within the framework of the World Health Organization.

To meet the objective of a climate-neutral EU by 2050 in line with the Paris Agreement, the EU needs to increase its ambition for the coming decade and update its climate and energy policy framework. To that end, the European Council endorsed a binding EU target of a net domestic reduction of at least 55% in greenhouse gas emissions by 2030 compared to 1990.

EU leaders intend to raise their climate ambition in a manner that will:

EU leaders highlighted the importance of mobilising public finance and private capital, and recalled the overall target of at least 30% of the total amount of expenditure from the MFF and NGEU being directed to climate action.

To promote the development of common, global standards for green finance, the European Council invited the Commission to put forward a legislative proposal for an EU green bond standard by June 2021 at the latest.

The European Council invited the Commission to assess how all economic sectors can best contribute to the 2030 target and to make the necessary proposals, accompanied by an in-depth examination of environmental, economic and social impacts at member state level. The Commission is invited to consider, in particular:

The European Council will return to the matter and adopt additional guidance in time before the Commission puts forward its proposals. The future of the Effort Sharing regulation will be tackled then.

The EU’s nationally determined contribution, provided for in the Paris Agreement, will be updated according to the new binding target and submitted to the UN Framework Convention on Climate Change (UNFCCC) secretariat by the end of the year. Ahead of the 26th Conference of the Parties to the UNFCCC, which will take place in the United Kingdom in 2021, the European Council reiterated that international engagement is crucial to success in addressing climate change and called on all other parties, in particular major economies, to come forward with their own ambitious targets and policies. It underlined the importance of strong coordinated action through active European climate diplomacy.

EU leaders condemned the recent terrorist attacks across Europe and reaffirmed their unity in the fight against radicalisation, terrorism and violent extremism.

As regards the victims of terror acts, leaders underlined the importance of providing support and of the full implementation of the relevant EU directives.

Leaders welcomed the Commissionʼs presentation of the new EU agenda on counter-terrorism and reaffirmed the role of the EU Counter-Terrorism Coordinator.

The European Council condemned all forms of attacks on the freedoms of expression, religion or belief, including antisemitism, racism and xenophobia. The leaders also underlined the importance of combating incitement to hatred, violence and intolerance and welcomed the latest Council declaration on the fight against antisemitism.

To prevent radicalisation and address the ideologies behind terrorism and violent extremism, the European Council called for more efforts to:

To support law enforcement and judicial authorities, EU leaders stressed the need to advance work on the following:

The European Council called for more efforts to make full use of European databases and information systems, in particular as regards entering in the databases relevant data on persons posing a serious terrorist or violent extremist threat.

Leaders also stressed the importance of ensuring that all persons crossing the EU’s external borders are checked against the relevant databases and invited the Council and the European Parliament to examine the proposal on the strengthening of Europol’s mandate.

Following elections in the United States, the European Council held a discussion on EU-US relations. It highlighted the importance of a strong strategic transatlantic partnership based on common interests and shared values. The leaders showed readiness to discuss shared priorities with the new President of the United States.

The EU looks forward to working together with the United States, in particular to reinforce the global response to fight the COVID-19 pandemic, tackle climate change, enhance the economic recovery, cooperate on digital and technological matters, strengthen mutual trade, address trade disputes, reform the WTO, and promote multilateralism as well as peace and security.

The European Council reverted to its conclusions of 1-2 October 2020 on the EU’s relations with Turkey in light of the situation in the Eastern Mediterranean.

Regrettably, Turkey has engaged in unilateral actions and provocations and escalated its rhetoric against the EU, EU member states and European leaders. Turkish unilateral and provocative activities in the Eastern Mediterranean are still taking place, including in Cyprus’ exclusive economic zone.

The European Council noted Turkey’s withdrawal of the vessel Oruç Reis and insisted on sustained de-escalation so as to allow for the early resumption of direct exploratory talks between Greece and Turkey.

EU leaders also reaffirmed the EU’s strategic interest in the development of a cooperative and mutually beneficial relationship with Turkey and stressed the importance of keeping channels of communication between the EU and Turkey open.

The offer of a positive EU-Turkey agenda remains on the table, provided Turkey shows readiness to promote a genuine partnership with the Union and its Member States and to resolve differences through dialogue and in accordance with international law.

The EU remains committed to defending its interests and those of its member states as well as to upholding regional stability. In this respect, the European Council invited the Council to adopt additional listings based on its Decision of 11 November 2019 concerning restrictive measures in view of Turkey’s unauthorised drilling activities in the Eastern Mediterranean. It also invited the High Representative and the Commission to submit a report on the state of play concerning the EU-Turkey political, economic and trade relations and on instruments and options on how to proceed, including on the extension of the scope of the above-mentioned decision, for consideration at the latest at the March 2021 European Council.

The European Council condemned Turkey’s unilateral steps in Varosha and called for full respect of relevant UN Security Council resolutions. It also supported the speedy resumption of negotiations and remained fully committed to a comprehensive settlement of the Cyprus problem, within the UN framework and in line with EU principles.

EU leaders agreed that a democratic, more stable, greener and more prosperous Southern Neighbourhood is a strategic priority for the EU.

Twenty-five years after the launching of the Barcelona process, we are determined to relaunch, reinforce and further develop this strategic partnership built on a shared geography and history.

Leaders stressed the need to jointly fight the COVID-19 pandemic, strengthen the resilience of economies and societies, preserve collective security, address the challenge of mobility and migration and offer prospects to young people on both shores of the Mediterranean. Work will be guided by the strategic agenda 2019-2024, the key principles of the EU’s neighbourhood policy and a new agenda for the Mediterranean, which is going to be developed, based on shared priorities.

On Libya, the European Council called on all actors to act in accordance with the principles of the Berlin process. The EU recalled the offer to support the Libyan Coast Guard through training and monitoring as well as the provision of equipment and vessels, in accordance with international law.

The European Council welcomed the adoption by the Council of an EU global human rights sanctions regime.

A Euro Summit in an inclusive format took place on 11 December, focusing on the banking union and the capital markets union.