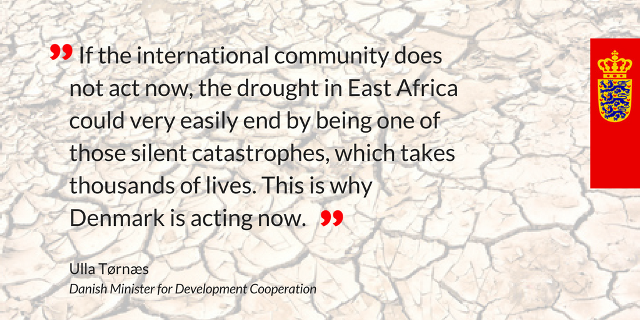 The Danish Minister for Development Cooperation, Ulla Tørnæs, is now increasing Denmark’s humanitarian assistance to combat the acute food security crisis in the Horn of Africa and Yemen. Denmark will provide 300 mio. DKK (approx. 42,8 mio. USD) in humanitarian assistance to the World Food Programme (WFP), the International Committee of the Red Cross (ICRC) and to Danish NGO’s working in the affected countries.

War and conflict combined with a lengthy drought have had serious consequences for the region, where an increasing number of people face an acute food deficit and are threatened by famine. In South Sudan, almost 5 million people, including 1 million children, are currently facing starvation, and last month the UN declared famine in the northern part of the country. Similar developments are now feared in other parts of the Horn of Africa. This extraordinary Danish contribution will enable the humanitarian partners to scale up their response immediately to address the alarming humanitarian needs.

“I have just returned home from Kenya, where I got a first-hand impression of the crisis that is currently unfolding in the region. The situation in the Horn of Africa is becoming more and more desperate with each day that passes. The UN’s humanitarian appeals are significantly underfunded, and millions of people are at risk. It is crucial that we respond efficiently in support of the people affected by the drought.”

The Danish contribution is a timely and prompt response to the UN appeals for increased humanitarian aid in response to the escalating food crisis in the Horn of Africa. Currently, less than 6% of the UN’s humanitarian appeals for relief efforts in South Sudan, Somalia and Yemen are funded, so there is a big need for more funds for critically needed emergency food assistance. In addition to immediate emergency relief, the Danish contribution will also support a number of longer-term initiatives aimed at strengthening food security and building resilience in the region, to prevent similar situations from developing in the future.

”If the international community does not act now, the drought in East Africa could very easily end up being one of those silent disasters, which costs thousands of lives. This is why Denmark is acting now. There is an urgent need for funding and, hopefully, other donors will follow suit with significant contributions. If we act now, we can save lives  and increase the resilience of the drought affected countries”, Ulla Tørnæs concludes.
The Danish contribution of 300 mio. DKK (approx. 42,8 mio. USD) will be allocated to:

The funds for WFP and the ICRC will be transferred immediately, while the funds for the NGO’s will be allocated over the coming month.

The Ministry of Foreign Affairs of Denmark to be among the...