Those who plant the seeds of the future do not die

Havana, 25 November 2021. We humans remember dates. We mark our calendars, count the days, note any coincidence.
Beyond the personal, our appreciation of dates is extended to those we love. No one forgets the birthday or the final goodbye of a loved one, and these dates become our own, as long as they have meaning, make us happy or sad.
This November 25, no one in Cuba is unaware that five years ago a being destined for eternal life left this world to live within us and in those who will follow us. 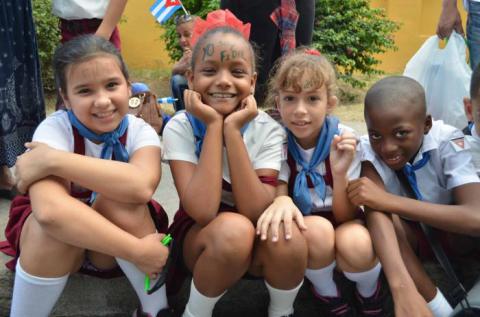 He did not set out to do so, but he filled his hours with action, determined to free Cuba forever from shameful imperial domination and to build a new nation. There was not a single day in Fidel’s existence that does not deserve to be remembered, because what he did for his people demanded uninterrupted constancy in action and thought.
This five-year period has done nothing to erase his presence even for a second. At the defining moments our homeland continues to face, Fidel breathes, is reborn and points the way to a future in Revolution, his future and ours.
On the University of Havana’s Grand Stairway, where Fidel descended triumphant with his comrades so many times, the hearts of young Cubans beat in unison for the homeland and for their undefeated giant, during a commemoration of the anniversary presided by Communist Party First Secretary and President of the Republic, Miguel Díaz-Canel Bermúdez, yesterday evening, November 24.
Heidi Chapman, with the music of the National Concert Band, Nelson Valdés, Raúl Torres, Eduardo Sosa, Tanmy López, Annie Garcés, the National Choir and the repentistas Aramís Padilla and Héctor Gutiérrez sang for him, and the Contemporary Dance Company of Cuba danced for him.
Aylín Álvarez García, first secretary of the Young Communist League’s National Committee, affirmed: Last November 15 was one of those days when a multiplied and firm Fidel, present in millions of Cubans, hit a home run against the destabilizing plans designed by the usual enemies. Once again they underestimated us as a nation and, especially, they underestimated the youth…
You will remember that five years ago we took the sacred oath “I am Fidel” … Fidel is among us and, just like his worthy, honorable works, he is multiplied in the infinite gratitude of those who deeply value his noble deeds.
Five years ago he left us physically, but he did not die, because those who bring light and plant the seeds of the future in a work as human as his Revolution – which he bequeathed to us, to make it more vibrant and strong – do not die. In it he is reborn every day.

Previous articleFidel with Cuba’s youth (+Photos)
Next articleCoronavirus: Commission proposes to strengthen coordination of safe travel in the EU