The second group of the contingent of Cuban doctors and nurses from the ¨Henry Reeve¨ Brigade declares their commitment at the Monument to the Victims of the terrorist bombing of the Cubana 455 flight in Barbados. 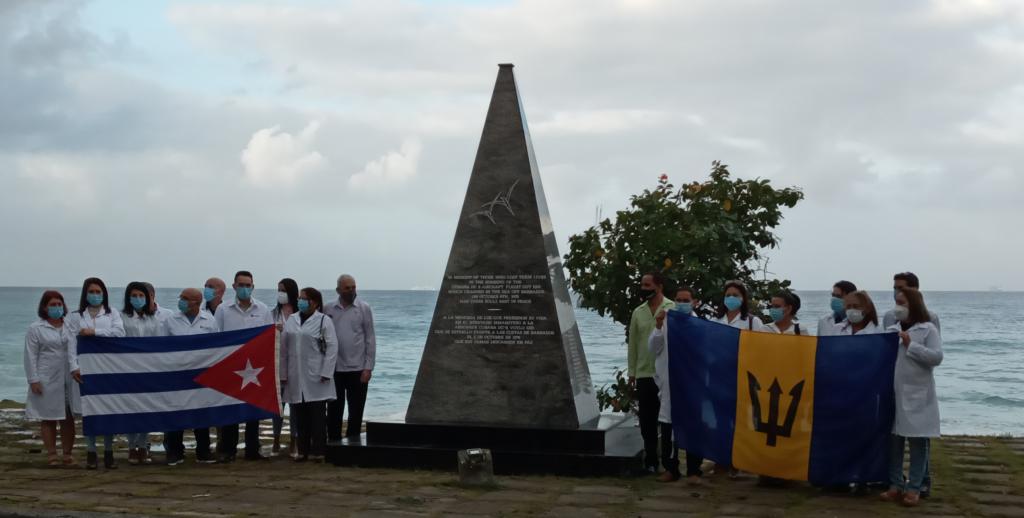 On the morning of February 1, at the end of their quarantine period and after knowing the result of the second negative RT-PCR test, the contingent of fifteen Cuban doctors and laboratory specialists who had been requested from the Government of Cuba by the Government of Barbados, visited the Monument to the Victims of Crime of Barbados to make a commitment to his internationalist work in this sister island nation of the Caribbean.

On behalf of the medics, Dr. Alberto Rodríguez Gallardo, specialist in anesthesiology, read the following text:

COMMITMENT SPEECH BY THE HENRY REEVE BRIGADE IN BARBADOS

Today we are gathered in front of this beautiful monument in Paynes Bay in the West coast of Barbados to commemorate one of the saddest and most regrettable events in the history of Latin America and the Caribbean.  On October 6, 1976, 73 people’s lives were taken from them due to the explosion in mid-flight of a Cubana Airlines civilian plane: flight Cubana four five five.

Experts and specialists from multiple branches confirmed the cause in every possible way of science and facts.  The explosion of two bombs in flight as a result of the actions of perverse minds, rotten by a deadly and contagious disease that ravaged the world at that time, which in Latin America and the Caribbean found as its final balance several hundreds and thousands of deaths and missing people in many countries of the region.  The sad thing is that from time to time it has recurrences and flare-ups.  Its name is: STATE TERRORISM.

Our beloved leader, Commander-in-Chief Fidel Castro, delivered extraordinary words of encouragement for the families and the people of Cuba, who felt the deep wound of the loss of so many precious lives, added to the pain caused by the impunity of a vile aggressor.

Our commander wisely declared that: “ (…) the pain multiplies … (…).  Yes, pain is transformed, it becomes the love of a living and strengthened people, it reaches all spheres of a society that struggles for life and a better world, it spreads like a powerful vaccine, and as part of it, it puts on white coats.  too.  To say NO to all forms of deadly disease that take innocent lives.  And to defend life to the last breath.

Today, the world is being ravaged by a terrible virus, very few escape its clutches or its aftermath.  It walks through all the continents with an impious and desolate step.  Its name is SARS-COV-2.

And we, the product of that love of the Cuban people, strengthened by the memory of their martyrs and their leaders, with the name of Brigade Henry Reeve, symbol of international solidarity;  we come to tell the brothers and sisters of the Barbadian people, and specially to the health personnel of Barbados: that we are by their side, in this fight for life, against covid-19 and against death.  That we will give all our strength, and that we will fulfill the commitment for which our Cuban Revolution has sent us here and that is, that together, Barbadians and Cubans, WE SHALL OVERCOME.
Thank you.

For his part, on behalf of the Government of Barbados, Ambassador David Comissiong declared the importance of having the accompaniment and support of Cuban medical specialists in order to face this pandemic both in Barbados and throughout the Caribbean, and expressed his gratitude for said support.

After the meeting at the monument, the specialists went to the Harrison Point hospital center where the Director of Epidemiology in charge of confronting the pandemic, Dr. Forde, welcomed them and began to define the specific tasks that they will undertake as epidemiologists, intensivists, respiratory ilness specialists, anesthesiologists, therapists and laboratory specialists. They join a hundred nurses who, under the direction of Dr. Daymarelis Ortega Rodríguez, Head of the Brigade, have been working in Barbados since April 2020, facing the pandemic for which they once again declared that they are and will be willing to work for as long as the Barbadian authorities and their people decide necessary, all of who have welcomed them with so much affection and gratitude.