Ulaanbaatar, Mongolia. January 29, 2021. The President of the National Chamber of Commerce and Industries of Mongolia Mr. Amartuvshin Otgondavaa and the President of the Chamber of Commerce of Cuba, Antonio Carricarte, held a virtual meeting in which they discussed the details of the Action Plan for the period 2021-2022, as well as the Cooperation Agreement between both Chambers of Commerce that will be signed in the coming months.

The highest authorities of both Chambers of Commerce expressed through their interventions the common objectives and interests in which the parties will work to contribute to the development of the bilateral economic – commercial exchange between Cuba and Mongolia. 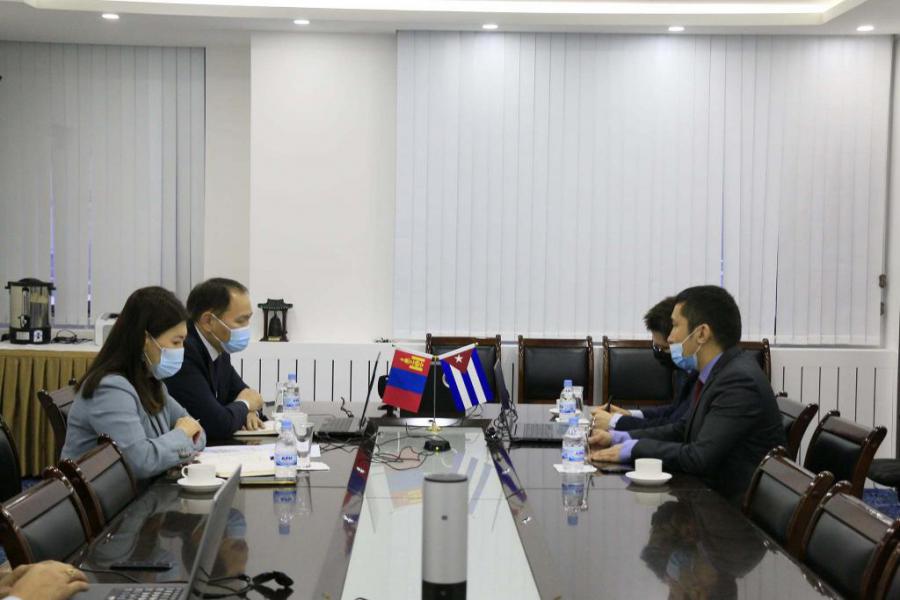 They agreed to work to stimulate and expand economic, commercial and investment relations and will use the experiences of both Chambers of Commerce to identify and develop business opportunities for companies from both countries, in order to strengthen and develop commercial activity. These agreements are part of the objectives set during the 2020 celebrations of the 60th anniversary of the establishment of diplomatic relations between the two countries, and the will of both governments to continue strengthening this relationship.

The identification of sectors such as biotechnology, tourism, livestock and agriculture were analyzed during the meeting in which they agreed to bring companies closer together through webinars and virtual meetings, prior to a virtual business forum to be held at the end of the month of February. The Cuban Ambassador to Mongolia, Raul Delgado Concepción and Rachel Velazquez, from the Directorate of International Relations of the Cuban Chamber of Commerce, also participated in the virtual meeting on the Cuban side, while Ms. Amgalan B. Director of International Relations and Cooperation of the National Chamber of Commerce and Industry of Mongolia. (EmbaCuba Mongolia)