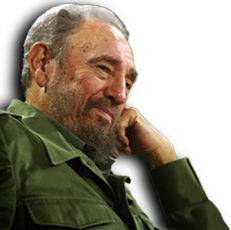 Athens Greece
To: Embassy of the Republic of Cuba
Dear compañera Zelmys,
The Editorial Board of Diethnes Vima wishes to extend its greetings on the occasion of this 5th anniversary of the passing away of comrade Fidel Castro.
Fidel through his actions demonstrated his confidence that working people in Cuba were capable of overthrowing capitalism and fighting to build a society where workers and farmers rule – a socialist society. Fidel helped lead the proletarian internationalist course of Cuba’s socialist revolution bringing selfless aid to the peoples of Africa, Latin America and Asia. Fidel helped reestablish the communist continuity of the Bolshevik revolution under the leadership of Lenin, a continuity that was destroyed in the post Lenin period of Stalinization in the Soviet Union and in the Comintern.
The internationalist communist course of Fidel is an example for toilers worldwide as we face the deepening crisis of capitalism with its increasing competition, exploitation and ravaging of nature and labor, increased wars, social dislocation, increased racism, anti-Semitism and political polarization. Fidel’s political course shows us that yes, working people can rule and build a society based on solidarity and justice, a socialist society – the only way out of the current world crisis.
One of the very first books published by Diethnes Vima was the “First and Second Declarations of Havana” which were read by Fidel to over 1 million working people in Havana. The “Second Declaration” outlined the reason for the socialist course of the Cuban revolution. Since then we have published a dozen titles by Fidel, Che and other leaders of and participants in the Cuban socialist revolution. Diethnes Vima will continue this work as part of making this political course available to working people whose first language is Greek.
The Cuban revolution must be defended! The Cuban Revolution must be emulated!
In solidarity,
Editorial Board
Diethnes Vima

Previous articleMessage from Yiannis Bournous, vice president of the Friendship with Cuba group in the Hellenic Parliament, Deputy Head of Foreign Affairs, SYRIZA – Progressive Alliance
Next articleMessage from the Greek branch of REDH in tribute to the 5th anniversary of the death of the Commander-in-Chief