Fidel Castro: “In a nuclear war the collateral damage would be the life of humanity” 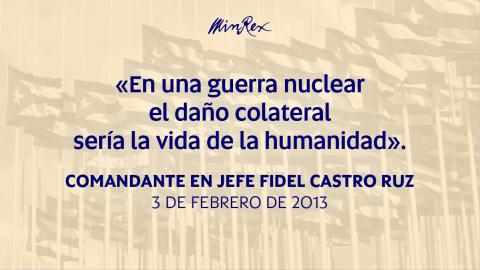 On the occasion of the entry into force on January 22 of the Treaty on the Prohibition of Nuclear Weapons, an instrument that qualifies its existence as a threat to humanity and contrary to International Humanitarian Law, Cubaminrex shares with its readers the Message of Commander in Chief Fidel Castro against Nuclear War.
Cuba was the fifth country to ratify the instrument, on January 30, 2018, a sign of its commitment to general and complete disarmament.
Message from Commander in Chief Fidel Castro Ruz against the Nuclear War
The use of nuclear weapons in a new war would imply the end of humanity. This was foreseen by the scientist Albert Einstein, who was able to measure its destructive capacity to generate millions of degrees of heat that volatilizes everything in a wide radius of action. The brilliant researcher was the promoter of the development of this weapon before the genocidal Nazi regime had it.
Any government in the world is obliged to respect the right to life of any nation and of all the peoples of the planet.
Today there is an imminent risk of war with the use of such weapons and I have no doubt that an attack by the United States and Israel against the Islamic Republic of Iran would inevitably turn into a global nuclear conflict.
The peoples have a duty to demand from political leaders their right to live. When the lives of his species, his people and his loved ones are at such risk, no one can afford to be indifferent, nor can a minute be lost in demanding respect for that right; tomorrow would be too late.
Albert Einstein himself stated verbatim: “I do not know what weapons will be used in the Third World War, but in the Fourth World War they will use sticks and stones.” We know what he wanted to express, and he was absolutely right, only that those who handle the sticks and stones would no longer exist.
There would be collateral damage, as American political and military leaders always affirm, to justify the death of innocent people.
In a nuclear war the collateral damage would be the life of humanity.
Let us have the courage to proclaim that all nuclear or conventional weapons, everything that serves to make war, must disappear!
Fidel Castro Ruz
October 15, 2010