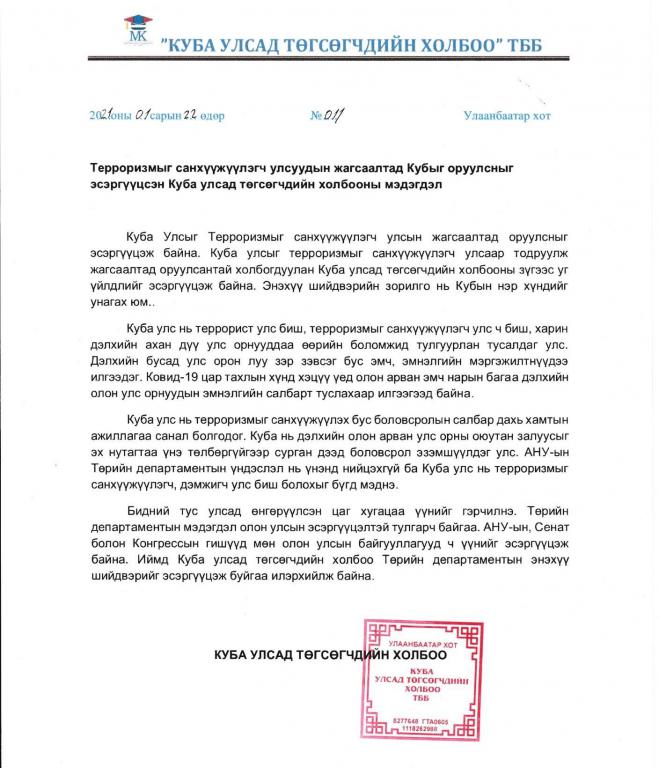 “THE ASSOCIATION OF MONGOLIAN GRADUATES IN CUBA” NGO

We reject the inclusion of Cuba in the list of countries sponsors of terrorism. The Association of Mongolian Graduates in Cuba rejects the act of qualifying Cuba as a state sponsor of terrorism and including it on the list. The objective of this decision is to defame Cuba.

Cuba is not a terrorist country, it is not a sponsoring country of terrorism, but it is a country that helps the sister countries of the world based on its capabilities. Cuba sends doctors and medical professionals to other countries in the world, but not arms. Despite the US blockade during that difficult time of the Covid-19 pandemic, Cuba has sent dozens of medical brigades to different countries around the world to help their health sectors.

Cuba does not sponsor terrorism but offers cooperation for the education sector. Cuba offers free higher education to students from dozens of countries around the world. The argument of the United States Department of State is false and it is a truth recognized by all that Cuba is not a state sponsor of terrorism.

THE ASSOCIATION OF MONGOLIAN GRADUATES IN CUBA