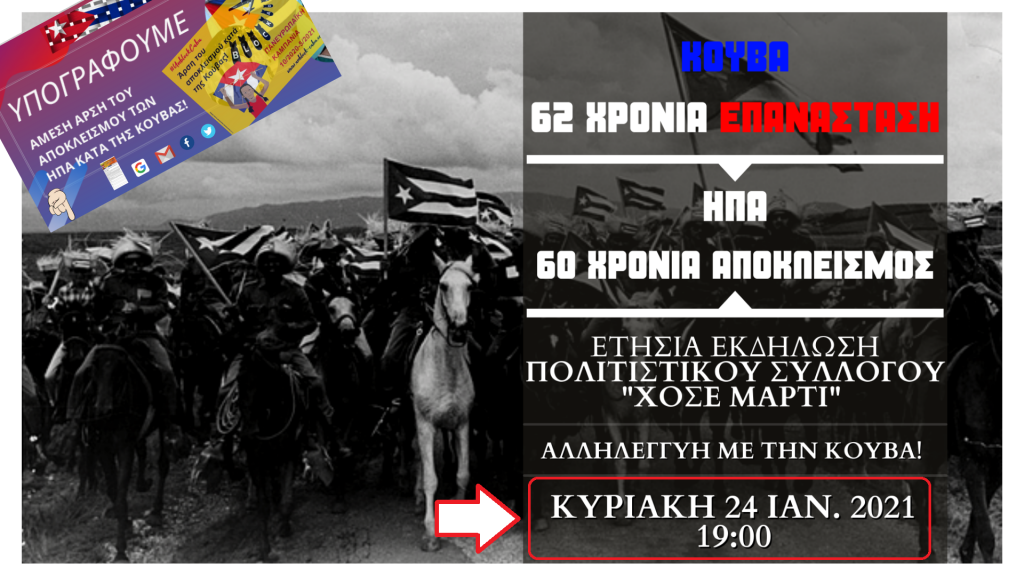 By La Red Solid @ ria Griega – Δίκτυο Bloggers
Athens, January 27. The José Martí Cultural Association – Solidarity with Cuba (ASCJM) – Greece held its annual act (this year virtually) on Sunday, January 24, entitled “CUBA: 62 YEARS REVOLUTION – USA: 60 YEARS BLOCK”, with the participation of many friends of Cuba throughout the country.
As always, the Ambassador of the Republic of Cuba in Greece, Zelmys Maria Dominguez Cortina, greeted this virtual event and thanked the organizers and participants for the permanent solidarity they provide to Cuba.
The invited speakers at the event were: Georgios Giannoulis University Professor of Law and Lambrini Thoma, a prominent journalist for the Press Project. In addition, many friends intervened with messages, including Damayantis Pacheco Noa, representative of the Association of Cuban Residents in Greece-Europe.
In this political-cultural event, subtitled videos have been broadcast on the blockade, Cuban doctors and the famous song already in Greece “With Cuba you don’t Goals.”
Moderator of the event, on behalf of the association was Natasha Terlexi and also Konstantinos Spiropoulos (ASCJM / Athens) and Giorgos Theodoridis (ASCJM / Thessaloniki).
The Association, which is actively participating in the European campaign #UnBlockCuba, collects signatures against the blockade, and so far almost 2,500 Greeks have signed.
The solidarity activity was one more example of the permanent support of the Greek friends towards Cuba in the framework of the 62nd Anniversary of the triumph of the Cuban Revolution and the Birth of the Apostle of Cuba, José Martí, whose name bears this Association of solidarity with Cuba in Greece .
The event was broadcast on social media and has been seen to date by more than 2,000 people. The video of the event is available on the internet: https://youtu.be/KwbLeNfR0o8