The Minister of Foreign Affairs and Development Cooperation H.E Amb. Albert SHINGIRO participates in the Extraordinary Congress of the CNDD-FDD Party 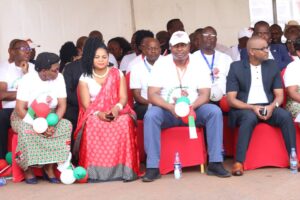 On Sunday January 24, 2021, the Minister of Foreign Affairs and Development Cooperation His Excellency Ambassador Albert SHINGIRO participated in the Extraordinary Congress organized by the CNDD-FDD Party in the Province in Gitega, under the theme: “Bagumyabanga, let’s strengthen democracy in Burundi by ensuring the election of our leaders ”in order to put in place a new Secretary General of the Party to replace His Excellency Mr. Evariste NDAYISHIMIYE, President of the Republic of Burundi who has been elevated to other high positions in the country .

They were also reminded to observe the preventive measures against the Corona Virus pandemic, to protect their families, their neighbors and the entire country by strictly observing the advice given by professionals from the Ministry of Public Health and the fight against AIDS.

The Bagumyabanga wholeheartedly thanked the members of the General Secretariat of the CNDD-FDD Party and all the Party Secretariats at the provincial, communal, zonal and hill levels for taking care to lead the Bagumyabanga in all wisdom, without bias, within the framework of to allow them to self-develop.

The Bagumyabanga welcomed the approach of the General Secretariat of the CNDD-FDD Party concerning the decentralization of power to the hills and ensuring the sharing of knowledge and technical skills that allow them to empower themselves through self-development projects and entrepreneurship.