Ambassador Claude Bochu said that the discussions will not only focus on relations between Burundi and the European Union but also on other subjects such as the international context, the regional situation as well as the paradigm of relations between the two continents of Africa and Europe, in particular on multilateralism which takes on the challenges of development and migration.
“Even the President of the Republic of Burundi HE Evariste Ndayishimiye had the opportunity to express his satisfaction and that of his people during his active participation in the African Union-European Union summit held in Brussels in February 2022”, added the Minister Albert SHINGIRO.
The Minister of Foreign Affairs and Development Cooperation indicated that they will continue the dialogue with a spirit of openness to achieve all the expected results, including the strengthening of restored trust, mutual understanding, mutual support, mutually advantageous partnership respectful of the sovereignty of each Nation in accordance with the Charter of the United Nations. 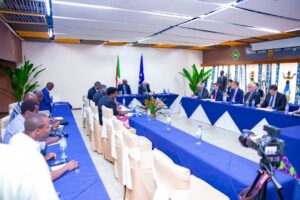 According to a press release made public after the exchanges, in the desire to sustainably consolidate the regained confidence and following the lifting of the measures against Burundi linked to Article 96 of the Cotonou Agreement, the two parties have agreed to continue the dialogue in order to exploit all the prospects offered by this renewal of relations, both from the point of view of cooperation and economic, commercial and investment opportunities, as well as to facilitate the implementation of the reforms included in the Burundian government’s roadmap, particularly in terms of good governance, justice and the rule of law, human rights, gender equality and the business climate.
He appreciated the positive role played by the Ambassador of the European Union and the Ambassadors of member countries accredited to Burundi in the process leading to the final lifting of these sanctions.
The two parties welcomed the excellent constructive climate that presided over their exchanges and agreed to continue them in the interest of the respective peoples. (MFADC)
According to this press release, this fourth meeting, at the invitation of the European side, took place in a constructive atmosphere. They agreed that between now and the next session, the two parties will continue discussions at the technical and sectoral level. 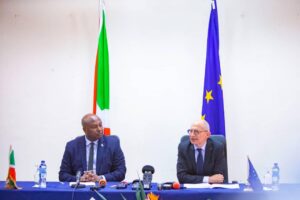 On Thursday, May 19, 2022, the Government of Burundi represented by HE Ambassador SHINGIRO, Minister of Foreign Affairs and Development Cooperation and the European Union in Burundi represented by HE Claude BOCHU, Ambassador of the European Union, and the Ambassadors of the Member States of the European Union resident in Burundi, namely Germany, Belgium, France and the Netherlands, have resumed their exchanges, the 4th session of political dialogue, as provided for in article 8 of the agreement of Cotonou linking on the one hand, the countries of Africa, the Caribbean and the Pacific and on the other hand, the European Union and its Member States.
In their brief speeches before the exchanges, their Excellencies Albert SHINGIRO and Claude BOCHU, did not fail to express their satisfaction with the holding of these political dialogues.
As for the Head of Burundian Diplomacy HE Ambassador Albert SHINGIRO, this 4th session of political dialogue was held at a time when the partnership between the government of Burundi and the European Union is gradually strengthening with the lifting in February 2022 of economic sanctions taken against Burundi since 2016.

Joint press release on the occasion of the 30th anniversary of...