On Wednesday 09 December 2020, the Ministry of Foreign Affairs and Development Cooperation organized Open Days, 2020 Edition with a view to informing the public of its achievements, its operation, its future prospects with regard to Burundi’s foreign policy and especially the role of the Ministry in the implementation of the National Development Plan (PND) 2018-2027. 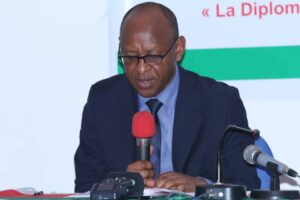 In his welcome speech at La Détente, the Representative of the Mayor of the city of Bujumbura, Mr. Christophe KINSHASA, Economic Advisor to the Mayor of the city seized this opportunity to express his warm thanks to all the guests who by presence, testify the interest they attach to the virtues of good governance through the action of transparency and accountability of leaders towards citizens on one hand, but also in the benefits of international cooperation on the other.

He also invited the public of Bujumbura to take advantage of this happy opportunity offered to him to be in front of diplomatic professionals who constitute an important source in the field of foreign policy in general and diplomacy in particular so that he can become familiar with the role of the Ministry of Foreign Affairs and Development Cooperation as a government institution ensuring the interface between the interior and the exterior of the country but also an institution which must be attentive to the burundian people who need to be heard and protected in their rights. 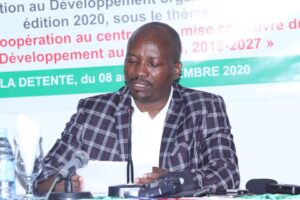 As with the previous activities of 2012 and 2014, the organizers of these activities talked about what the Ministry of Foreign Affairs and Development Cooperation does, how it operates, the challenges it faces in achieving its missions and its future prospects to face those challenges, and to embark resolutely with a strong determination the burundian population, in the way of progress which it deserves.

For this 2020 Edition, the chosen theme is “Diplomacy and Development Cooperation at the heart of the implementation of the National Development Plan of Burundi (PND 2018-2027). The theme aroused directly in the spirit and the letter of the constitution of June 7, 2018 which notably states in its preamble “Burundi reaffirms its greater determination to defend national sovereignty and consolidate its political and economic independence.

Therefore, the Permanent Secretary informed the participants about the achievements of the Ministry since 2014 in the diplomatic fields, field of training, etc.

In terms of expanding the diplomatic map, Burundi has also widened the circle of its friends by establishing diplomatic relations with new bilateral partners. During the successive years since the last Open Days in 2014, the Ministry of Foreign Affairs and Development Cooperation also held information sessions and information exchanges with Diplomatic and Consular Missions and Representatives of International Organizations accredited in Burundi.

In terms of training, many scholarships were awarded to young burundians at levels and training courses throughout the considered period.

With the withdrawal of Burundi from the agenda of the United Nations Security Council, the Permanent Secretary has declared that it remains only to embark on socio-economic development. For the Permanent Secretary, this decision came at the right time because Burundi does not constitute a threat to international peace and security. On the contrary, our country contributes substantially to the restoration of peace and security in the world.