Foreign Ministry in 2020: Diplomacy in Time of Coronavirus; in Eurozone Waiting Room; Support for Expat Bulgarians 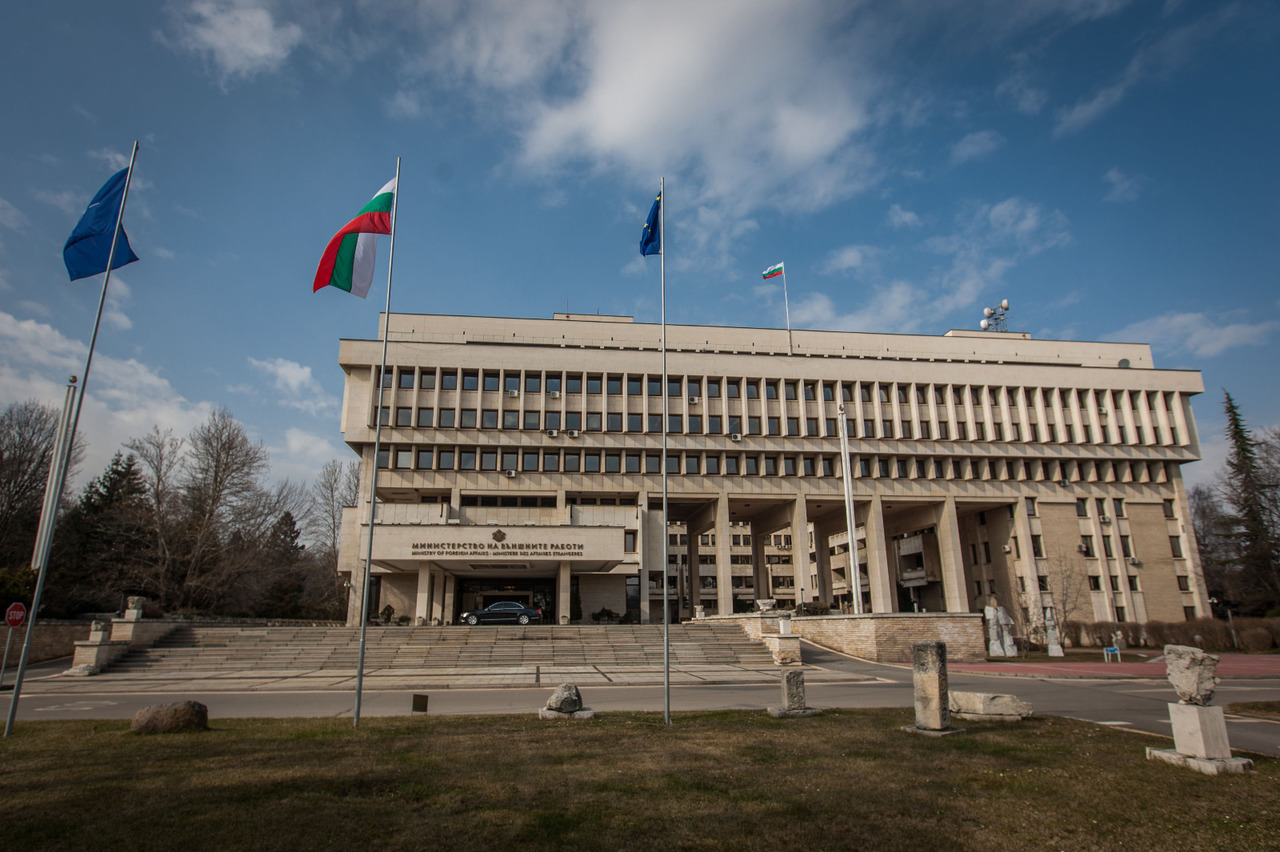 Diplomacy, too, had an unusual year in 2020. We present the highlights in the work of the Ministry of Foreign Affairs during the last 365 days.

We helped 7,000 Bulgarian citizens get back home, and the Situation Centre at the MFA received 96,000 calls from citizens requesting assistance. We continue to receive such calls even at this point.

Back since the first day of the surge of the pandemic in March, the Ministry was busy ensuring ‘green lanes’ for individuals and freight carriers. We set up a round-the-clock information centre with six direct helplines. On numerous occasions our consular officers went to see on site Bulgarians stranded on motorways and at airports worldwide, assisting them and providing them with food and water.

We helped Bulgarians in 89 countries to return home. We also assisted the homecoming of other EU citizens and neighbouring countries’ nationals. A shipment of medical supplies from China arrived in Sofia in April on a flight arranged within the framework of NATO’s Strategic Airlift Programme.

At the height of the summer tourist season, the MFA engaged in an active dialogue with the Greek side and succeeded in keeping open Ilinden-Exochi, Kulata-Promachonas, Makaza-Nymfaia and other checkpoints on the Bulgarian-Greek border, in line with the insistence of Bulgarian carriers operating between the two countries and Bulgarian citizens’ cross-border trips. Arrangements were reached for stay and transit through Romanian territory. In a dialogue with the Turkish side, a lane for heavy-duty truck traffic was ensured at crossings along the two countries’ common border, considering the importance of this route for the countries of Europe and the fact that Kapitan Andreevo is the largest entry point at the external EU land border.

The validity of Bulgarian documents presented an additional problem in conditions of travel restrictions. The passports and identity cards of quite a few Bulgarian citizens abroad are expiring or have already expired, and their holders find it extremely difficult to have them renewed.

Therefore, the MFA initiated legal amendments by which the validity of the identity cards and passports expiring between 13 March 2020 and 31 January 2021 was extended by 6 months. We requested our foreign partners abroad to recognise the expired Bulgarian document on the basis of reciprocity, so that our compatriots could travel back home. Forty-eight countries responded to our request by 31 October, and after we renewed it, asking for recognition of expired documents until 31 July 2021, ten countries have already confirmed that they will do so.

In connection with the lapse of the post-Brexit transition year, the MFA continued to prioritise the rights of Bulgarian citizens in Britain. Thanks to an awareness campaign launched back in 2019, as many as 220,570 Bulgarians had applied for Settled/Pre-settled status by October 2020.

We continue to help and take care of the historic Bulgarian communities abroad.  In 2020 Ekaterina Zaharieva became the first Bulgarian Foreign Minister to visit Ukraine in five years. The understandings reached during that visit included expediting arrangements for the opening of a school in Odessa with instruction in Bulgarian.

Thanks to the constructive dialogue with the Ukrainian authorities, when the administrative divisions of Odessa Oblast were reformed we succeeded in keeping the Bolhrad District, which is home to the densest and largest population of Bulgarian descent, and a dilution of the Bulgarian ethnic identity was prevented.

In February 2020, the Council of Ministers allocated BGN 500,000 for financing projects of the Bulgarian communities in Albania, Serbia, Kosovo, Ukraine and Moldova, as well as of organisations of citizens in the Republic of North Macedonia identifying themselves as ethnic Bulgarians. Contracts continue to be signed at this point under projects financed with this aid.

The pandemic showed us that, globally, we need joint solutions and solidarity more than ever before. Bulgaria adapted the Bulgarian Development Aid, retargeting the resources to humanitarian aid and projects intended to combat the effects of the crisis. In a spirit of solidarity, we sent medical equipment to the countries of the Western Balkans, Eastern Europe and the Middle East.

We continued to support Albania to cope with the aftermath of the November 2019 earthquake, when we allocated BGN 200,000 and sent two engineering crews to that country. In February 2020, Bulgaria provided another EUR 100,000 within the framework of the donor conference organised by the European Union.

The Bulgarian Government is also assisting Croatia in connection with the devastating earthquake that struck on 29 December. We allocated EUR 100,000 in initial aid for dealing with the aftermath of the disaster, and the first heavy-duty truck load of mineral water donated for the victims left on 31 December.

Support for the European integration of the six Western Balkan countries is one of our key foreign-policy priorities.  In March, we backed the decision of the Council of the European Union to open EU accession negotiations with the Republic of North Macedonia and Albania. At the end of the year, we were compelled not to approve the negotiating framework for the Republic of North Macedonia. By its position, Bulgaria seeks to overcome the problems rather than to slow down the accession of the Republic of North Macedonia. Bulgaria adheres to the Council of Ministers Framework Position of 9 October 2019, backed by a National Assembly Declaration of 10 October 2019. Regarding Albania, we confirmed our country’s support for the draft negotiating framework.

In 2020, the Minister of Foreign Affairs visited a number of countries with which we marked round-numbered anniversaries of the establishment of diplomatic relations: 140 years with Greece, 100 years with the Czech Republic and Hungary, 30 years with Israel. The year also saw jubilees of our diplomatic ties with the Holy See, the Republic of Korea, Vietnam, Pakistan and Mongolia.

In 2020, Bulgaria celebrated the 75th anniversary of the United Nations and 65 years since our country joined the organisation.

We achieved something more important in Bulgaria’s European integration this year: our country’s entry into the Exchange Rate Mechanism (ERM II) and accession to the Banking Union. Bulgarian diplomacy shares the credit for this success. Bulgaria’s election for a ninth time to the UN Economic and Social Council (ECOSOC), one of the six principal organs of the World Body, for the 2021-2023 period, as well as Mrs Velina Todorova’s re-election as member of the UN Committee on the Rights of the Child, came as an acknowledgment for Bulgaria.

In 2020, Bulgarian central-government departments joined the work of an increasing number of committees and working groups of the Organisation for Economic Co-operation and Development (OECD) in various policy areas, which is a step towards full-fledged membership of the Organisation.

Acknowledging the progress made by our country, the OECD Council approved Bulgaria’s application to join the OECD Nuclear Energy Agency.

In 2020 we took over the hosting of the Three Seas initiative, and in 2021 Sofia will host the Summit of the initiative intended to integrate the countries located between the Baltic, Adriatic and Black seas. Bulgaria joined the Three Seas Initiative Investment Fund, contributing EUR 20 million.

The MFA launched a major rotation of ambassadors. The new ambassadorial appointees will bring the number of men to 50 and that of women to 23, which gives more ladies the chance to head important missions: the Permanent Representation to the UN in New York, the Permanent Representation to the Council of Europe in Strasbourg, and the Embassy in Tokyo.

We also took care of the working conditions of the colleagues at the Ministry’s Central Office at 2 Alexander Zhendov St. . Waterproofing was installed in the underground car park, which had not been repaired since going into operation 35 years before and which posed a hazard to the employees and the official cars. The joinery of the building had not been replaced since then, either. The newly fitted joinery now has enhanced energy-efficiency, which helps the Ministry save on heating costs.