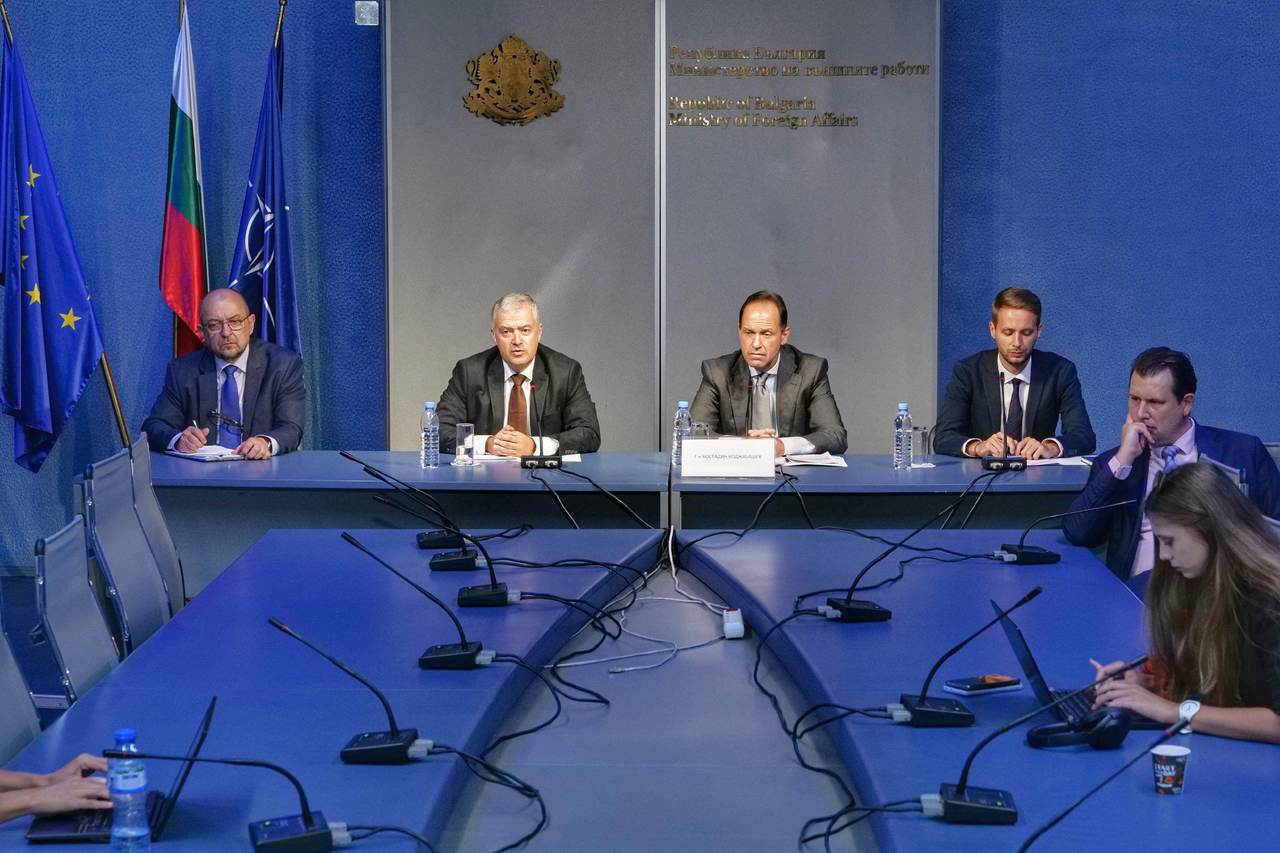 Deputy Minister of Foreign Affairs Kostadin Kodzhabashev gave an overview of current topical issues related to the work of the Ministry of Foreign Affairs during a regular briefing at the Ministry. Among the main highlights were the organization of the National Assembly elections on 2 October abroad, the process of Bulgaria’s accession to the Schengen area and the Second Summit of the International Crimean Platform.
At the National Assembly elections on 2 October 2022, Bulgarian citizens will not be able to vote with IDs that have expired due to the abolition of the state of emergency law, the permanent secretary of the Ministry of Foreign Affairs further said.
The Chairman of the working group “Elections” also informed that the authorities in the Czech Republic have refused voting in places outside our overseas representation in Prague. “Despite our intensive talks with the Czech authorities, we received a written refusal. The permission given in the last elections to vote outside our embassy was described as an “exception”, he added.
Among the topics discussed at the briefing was the Bulgarian participation in the Second Summit of the International Crimean Platform, organized by Ukraine under the auspices of President Volodymyr Zelensky. Our country was represented by the Minister of Foreign Affairs Nikolay Milkov. The meeting was held via videoconference.
More than 16 thousand applications for voting abroad have already been submitted. This is a significant increase compared to last week, when there were just over 2500. At the same time, it remains far from the 55 thousand declarations from the last elections, Ivan Kondov explained. He urged Bulgarian citizens to continue actively registering, as pre-registration facilitates and speeds up the voting process. The closing date for applications to vote abroad is 6 September 2022.
At the briefing, it was announced that the restoration of the Bulgarian embassy in Ukraine is underway. “One of the first things the caretaker government did was to start the procedure of phased opening of our mission in Kiev. If the situation there allows and provided that the necessary applications for voting are collected, it is possible to open a polling station on the territory of the embassy”, said Kostadin Kodzhabashev. At the moment, there is no decision to open the Consulate General in Odessa as the situation does not allow it.
Ivan Kondov, Chairman of the working group “Elections” and Permanent Secretary of the Ministry of Foreign Affairs, presented information on the organization of the vote abroad. “To date, we have permits from 48 countries. We still do not have permission from three countries with large Bulgarian communities – Greece, Italy, Canada, but no problems are anticipated,” he said.
Regarding the process of Bulgaria’s accession to the Schengen area, Deputy Minister Kodzhabashev pointed out that our country had met the membership criteria already in 2011. “Bulgaria’s readiness has been repeatedly confirmed both by the European Parliament and the EU Council,” he said.
A total of 51 countries plus Ukraine and 7 international organizations participated in the Second Summit of the International Crimean Platform. The Deputy Minister highlighted the exceptionally high level of performance of the participants, who adopted a joint statement condemning the Russian military aggression in Ukraine and expressing solidarity with the Ukrainian people.
In its statement, the Bulgarian side reaffirmed its support for the sovereignty, independence and territorial integrity of Ukraine within its internationally recognised borders, including territorial waters, Kostadin Kodzhabashev said.
Deputy Minister Kodzhabashev pointed out that the reform of the Schengen area has again put on the agenda the issue of its enlargement. “At the political and administrative level, all necessary efforts are being made to successfully complete the process as soon as possible”, the Foreign Ministry spokesperson stressed.
Regarding the machine voting Ivan Kondov pointed out that according to the decision of the Central Election Commission 289 places have been designated for voting with machines – 55 places will vote with 1 machine and 234 places with 2 machines. Currently, the total number of voting machines in elections abroad is 523.