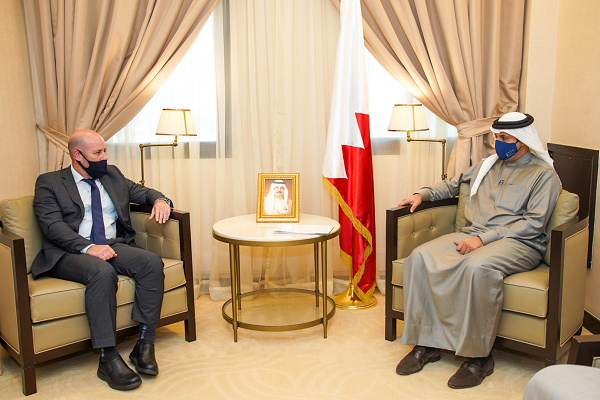 The Undersecretary of the Ministry of Foreign Affairs for International Affairs, Dr. Shaikh Abdullah bin Ahmed Al Khalifa, met today at the Ministry’s General Court the Chargé d’Affaires of the State of Israel to the Kingdom of Bahrain, Itay Tagner.

During the meeting, Dr. Shaikh Abdullah stressed that the Kingdom of Bahrain, under the leadership of His Majesty King Hamad bin Isa Al Khalifa, believes in the importance of investing in peace culture and dialogue, as well as consolidating coexistence for the sake of security, development and prosperity for the people of the region. He also reviewed the course of bilateral relations between the two countries and ways to develop them to meet joint aspirations, hailing the efforts exerted by Ambassador Tagner to promote relations between the two friendly countries, wishing him further success.

For his part, the Israeli Chargé d’Affaires expressed his country’s appreciation for the wise and pioneering policy of the Kingdom of Bahrain, which contributes to promoting the security and prosperity of the region, wishing the Kingdom further development.