The Government of The Bahamas and Ministry officials continue to monitor the security situation in Haiti. Furthermore, plans are currently being formulated for a meeting with relevant international stakeholders within The Bahamas.
End – 20th August, 2022 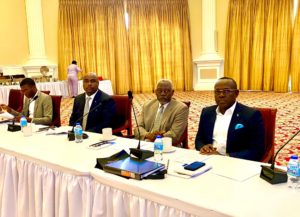 The meeting was held to acquire an update, assess and exchange views on ameliorating the security situation in the Republic of Haiti, which continues to deteriorate with indiscriminate kidnappings and killings within the Cité Soleil neighborhoods and the wider Capital city of Port-au-Prince. As a result of the security situation, it is estimated that 3,000 people have fled their homes, including hundreds of unaccompanied children. Furthermore, the high level of insecurity is compromising humanitarian access to affected people, as well as to basic services such as health and education for 1 – 1.5 million people trapped in gang-controlled neighborhoods.
The Ministry of Foreign Affairs advises members of the public that Deputy Prime Minister, and Minister of Tourism, Investments and Aviation, The Hon. I. Chester Cooper, led a delegation comprising Ambassador Godfrey Rolle, Charge d’Affaires a.i., The Bahamas Embassy in the Republic of Haiti, and Mr. Antonio V. Butler Jr., Foreign Service Officer, CARICOM Division, at the Second Special Meeting of the Lead Heads of Government of the Caribbean Community (CARICOM) on Haiti in Trinidad and Tobago at the Prime Minister’s Residence & Diplomatic Centre on Saturday, 20th August 2022.